In April of 2011, Upright Brewing and writer/mixologist Jacob Grier helped resurrect the Kopstootje, or at least introduced it to American audiences. Today, Monday, October 12th, they bring the successful experiment back to life with a special tapping celebrating the release of a new batch at new Portland Belgian beer and Mussels bar La Moule. Kopstootje is a special spiced beer designed to be paired with Dutch spirit Bols Genever and served and drank in a special presentation. More details below.

This event at 5pm tonight is worth going to just to check out La Moule, a new spot we rated highly for Belgian-style food and a great beer list of both Belgian classics and local interpretations. Also, Alex Ganum of Upright Brewing and Jacob Grier, a former product rep for Bols Genver, will be on hand to demonstrate how to do a Kopstootje right. And if you cannot make it tonight, fresh kegs of Upright’s Kopstootje are now available from Point Blank Distributing and should be popping up on tap around town.

So what is a Kopstootje? Rather than repeat what I have already written, I have instead just copied and pasted the contents from my March of 2011 article and interview with Alex Ganum on the Kopstootje below the jump.

Upright Brewing’sKopstootje Biere, a lager/ale hybrid based on forgotten French brewing traditions that use a variety of herbs and spices. This beer is designed to be drunk as a beer back to the classic spirit Bols Genever in a one-two punch combination called a Kopstootje, or “little headbutt”.

Ah, I can already hear the cries of purists everywhere, but before you leap to conclusions, I know what you’re thinking. ‘If I wanted hard liquor or a cocktail I would go out and buy one.’ Sure, but aren’t you already enjoying the effects that spirits can have on beer? After all, what is it that makes that Full Sail Black Gold so good? Isn’t it the charred oak and that whiskey spice? Same goes for that Flanders red aged in pinot barrels, or numerous other examples. So, open your minds for a second and hear about the latest crush between a spirit and a beer in the Kopstootje.

To understand Upright’s Kopstootje biere, you must first know the Dutch spirit that inspired it:Bols Genever, which may be little known in the states but is the #1 spirit in Holland. What exactly is Genever and what spirit category does it fall into? I talked to Jacob Grier, the mixologist/writer who happens to be the local ambassador for Bols Genever and the originator of the Kopstootje Biere project, and asked him to describe it:

“It’s made with a grain distillate called malt wine and flavored with juniper and other botanicals. Though English gin made from neutral spirits evolved from genever, genever is very distinct. It’s less assertive with the juniper and the maltiness of the spirit gives it whiskey-like properties, making it good both in cocktails and sipped neat.”

The “Little Headbutt”
Jacob has been promoting the return of the Kopstootje (a traditional way to drink Genever) since last summer when we got together to collaborate to create Brewing up Cocktails. The Genever in this combination is served in a neat, straight up shot in a special glass that resembles a tiny Belgian tulip glass with a stem. The drinker leans over the glass taking a first sip and trying not to knock it over, hence the “little headbutt”. The rest of the spirit is alternately drunk between sips with a light and crisp beer, usually something like a pilsner. What makes these two such a good combination is that malt and hops are flavor features of both. Yes, one of the botanicals in Bols Genever is hops, and it’s a malt-based spirit. 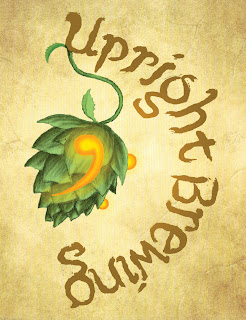 The Biere
How did it come about that Upright Brewing, makers of French- and Belgian-inspired ales, would make a beer specifically for this combination, a beer that is being called the first in the world to be created to pair with a spirit?

“This being ale-loving Portland, we wanted to try something a little different. We approached Alex Ganum of Upright Brewing to see if he would be interested in brewing a beer specifically made to pair with Bols Genever. Upright is one of my favorite breweries, so I was thrilled when he said yes.” – said Grier

The attraction for the Bols Genever brand is obvious: what better way to promote your product than teaming up with a beer geek favorite craft brewery in a city famous for the residents love of them? But what was the draw for Upright Brewing, which usually focuses on saisons and other farmhouse ales? To Upright owner and Brewmaster Alex Ganum, the idea required little convincing:

“(when Jacob Grier) suggested the idea, I just couldn’t pass it up, as that sort of thing is right up my alley. I love using herbs and spices in beer and this immediately struck me as a fun opportunity to do so. Because the brewery is focused on farmhouse style beers, I though it would be appropriate to stick with that and do a Biere de Garde base for the Kopstootje.” – Alex Ganum

In Upright’s tradition of upgrading traditional styles of beer, the Kopstootje beer fits in well as something both rustic but modern, with an interesting brewing process and a unique blend of herbs and spices designed to complement the Bols Genever. Since Ganum recently started producing a year round lager, he decided to use that yeast (a Munich lager strain) at an elevated temperature, similar to what some larger French brewers were doing decades ago:

“It’s literally a halfway modern take on a style that goes back roughly 100 years,” said Ganum.

After sitting around the brewery drinking beers and genever, Grier and brewers Ganum, Gerritt Ill came up with the idea of using some of the same ingredients as the genever in the beer. The finished product uses a dizzying array of malts, adjuncts, botanicals, and spices: Vienna malt, roasted raw wheat, rolled rye, flaked maize, spalt hops, angelica root, clove, aniseed, ginger, juniper berries, and licorice root. Alex describes how he was inspired to create the beer:

“After Jacob divulged the main botanicals used in Bols Genever, I was excited to incorporate them into the recipe, especially angelica, which I had never used before and seemed to play into the Biere de Garde profile nicely, simulating the “cellar” or musty flavor often associated with the style. Overall, the intention was to make something gentle and balanced, to not overpower the spirit but still unique and interesting like the Genever itself.”

This coming Friday, April 1st, at 5-8pm will be the grand unveiling of the Upright Kopstootje Biere at the recently opened Circa 33, located at 3348 SE Belmont in Portland, OR. I am sure the Bols Genever will also be flowing.
Also, look out for Breakside Brewery’s release of its cocktail barrel-aged beer on Wednesday, April 27th that will be the brewery’s entry for this year’s Portland Cheers To Belgian Beers. And as far as cocktail beers, this is just the beginning of a new trend, but will it be a passing fad? Not exactly, thinks Alex Ganum:

“Does trend imply that it will come and go? I think it’s here to stay, but will be mostly enjoyed by the minority of people who are both craft beer and spirit enthusiasts, that’s all.”

That might be a relatively small number of people, but on the other hand those are the people keeping craft distillers and brewers like Upright and Bols in business. Perhaps their collaboration will help turn a new generation on to the pleasures of both.